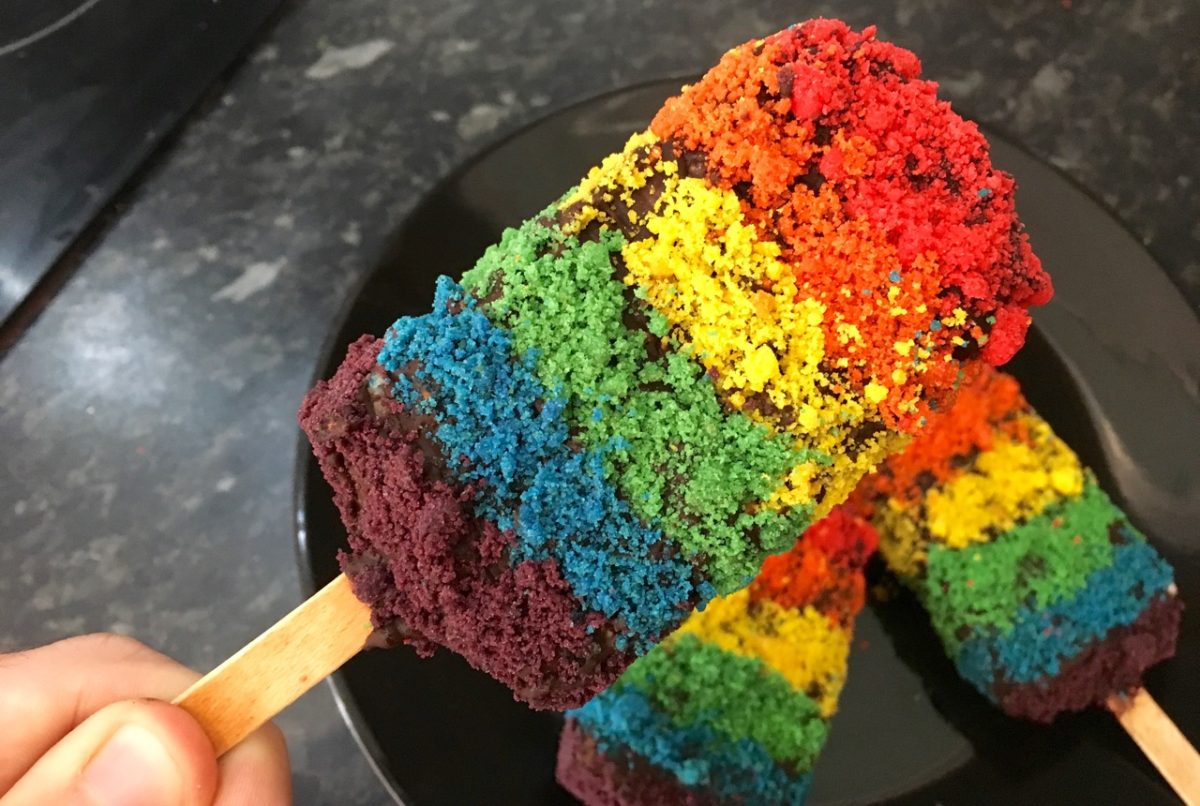 Last year I was lucky enough to visit Australia and experience the joy that is the Golden Gaytime. For the less fortunate, it’s a toffee and vanilla flavoured ice cream coated in chocolate and biscuit pieces. In the UK we have Feast which is similar but tastes of chocolate and sadness — the Feast can’t hold a candle to the wonderous Gaytime.

Anyway, the Gaytime has something of a cult following. Jesse McElroy, a Gaytime superfan has previously successfully campaigned to bring Gaytime tubs and a Gaytime Cornetto to market. For Sydney Mardi Gras he released a photo of a Rainbow Gaytime prototype which got everyone excited but it doesn’t seem to have materialised.

So I thought I’d have a bash at it myself. You might know that Australia is currently in the process of arranging a plebiscite on equal marriage. It’s something I feel strongly about even though I can’t vote so this is one way in which I can express love for my Aussie friends who are currently working incredibly hard to make sure the right thing gets done.

McElroy didn’t release any details of his prototype so I had to experiment. My first thought was to try and use food colouring to dye crushed up biscuits, but that just made a soggy mess.

Then it hit me — rather than trying to dye pre-baked biscuits, what if I baked the biscuits with the colour and then crushed them? So I whipped up a prototype batch and was happy to find that it worked perfectly.

So here’s how it works — make up a simple shortbread recipe, split the dough into six and add the colourings. It’s important you use highly-concentrated bake-stable colourings to get the bright colours. I used Sugarflair. You also don’t need to buy all six colours — you can just use red, blue and yellow, mixing them as needed to get the orange, green and purple. I also added some concentrated toffee flavouring for the authentic Gaytime flavour. 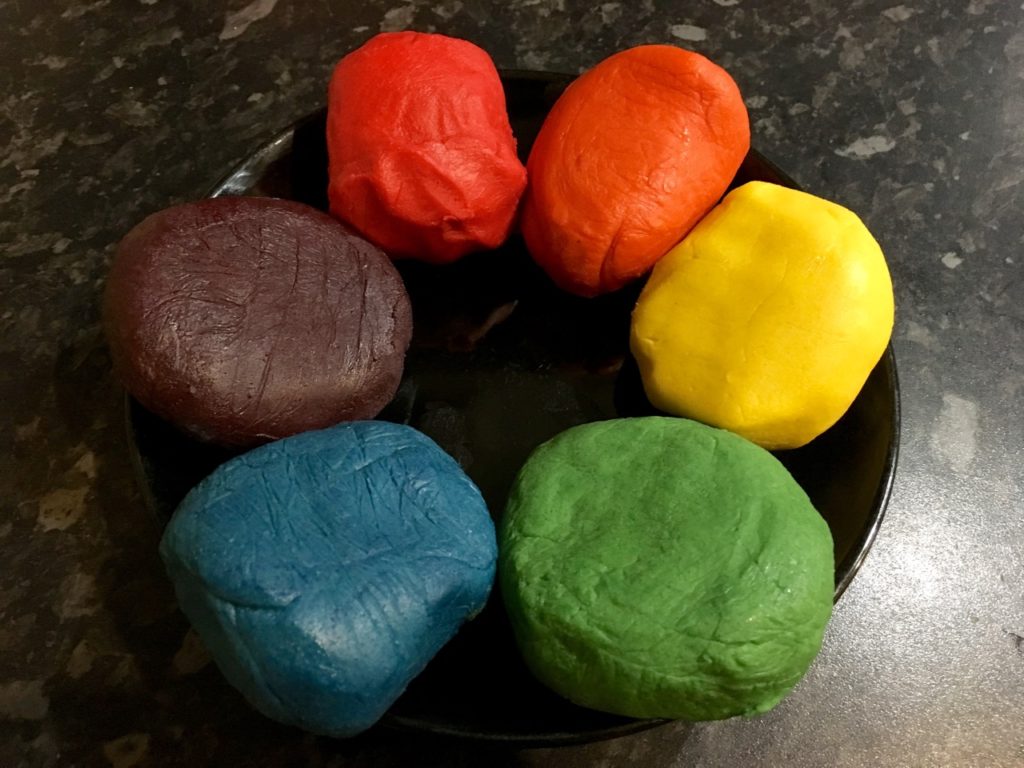 Then you just need to bake some biscuits ready to be crushed. It sounds harsh, but these biscuits were born for a greater purpose. You can bake extra shortbreads and eat them as-is. They look great on their own. One tip is to err on the side of underbaking them to avoid them burning and compromising the colour. This is particularly important for the yellow and blue batches. 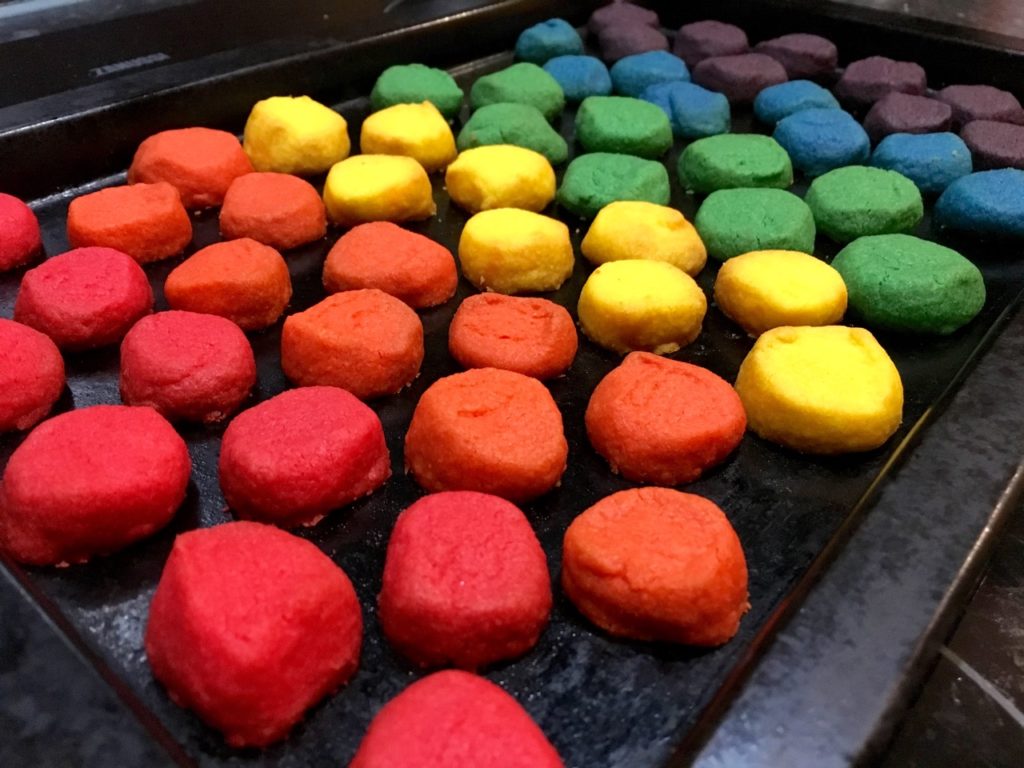 When crushing the biscuits you’ll want to be thorough and get the crumbs as small as possible for best coverage. Large crumbs look good but it’s hard to get them to stick. Put the crumbs in bags and freeze them, spreading them out to avoid clumping. When it’s done you should have something like this: 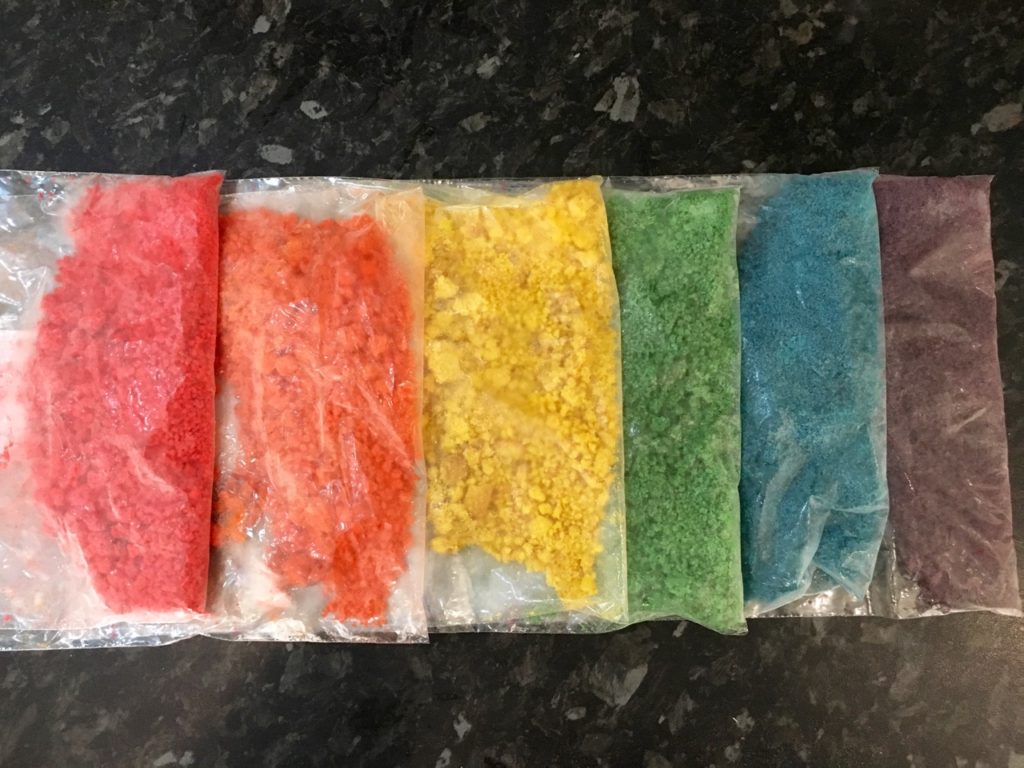 Then it’s just a case of applying the crumbs to the Gaytime. I did that by melting some chocolate on a bain-marie and then painting it onto the ice cream before applying the crumbs. You have to work quickly as the cold ice cream will solidify the chocolate so I found it easiest to do it in small sections rather than trying to do a whole band at once. Another reason to go quickly is the that the ice cream doesn’t melt and leak out of the chocolate, but this is a messy job any way so be prepared to get covered in chocolate, ice cream and colourful crumbs. I found some in my ear just now, not even joking.

So the final result will look something like this — maybe not as photogenic as the prototype but still fabulous. You’ll probably want to pop them back in the freezer in plastic bags so they don’t just melt everywhere, but whatever floats your boat. 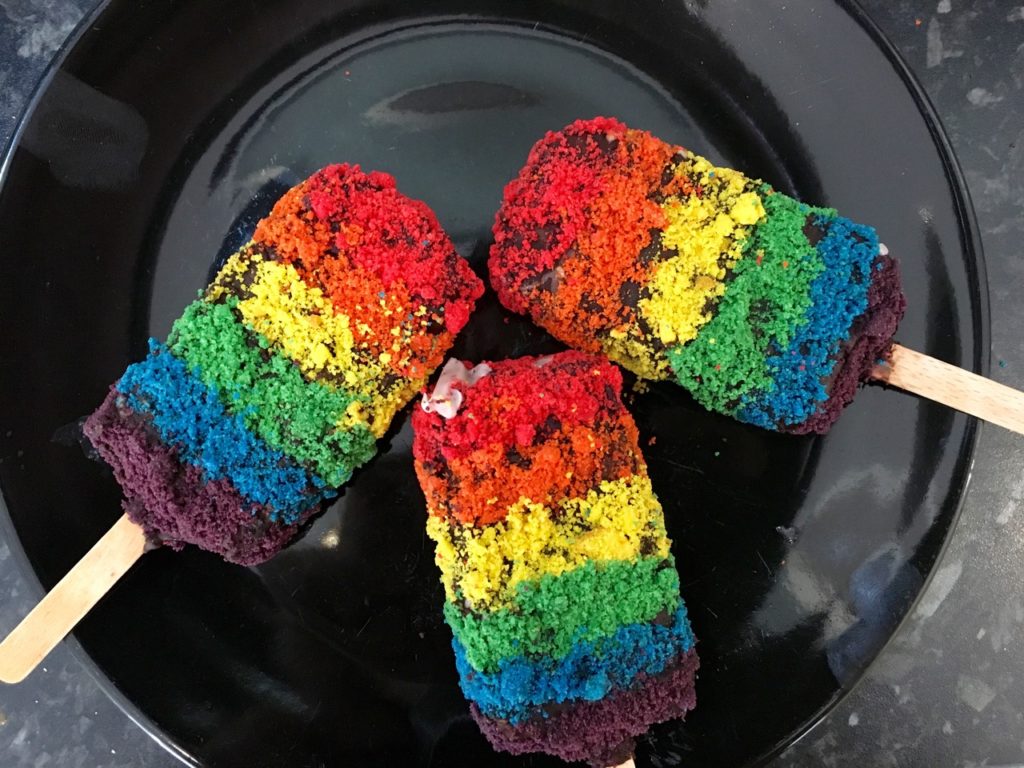 Essentially this is just a shortbread recipe with extra steps, but anyway. The quantities here will give you heaps of biscuits so you should have extra that you can use as-is. If you aren’t bothered you can probably halve the quantities. 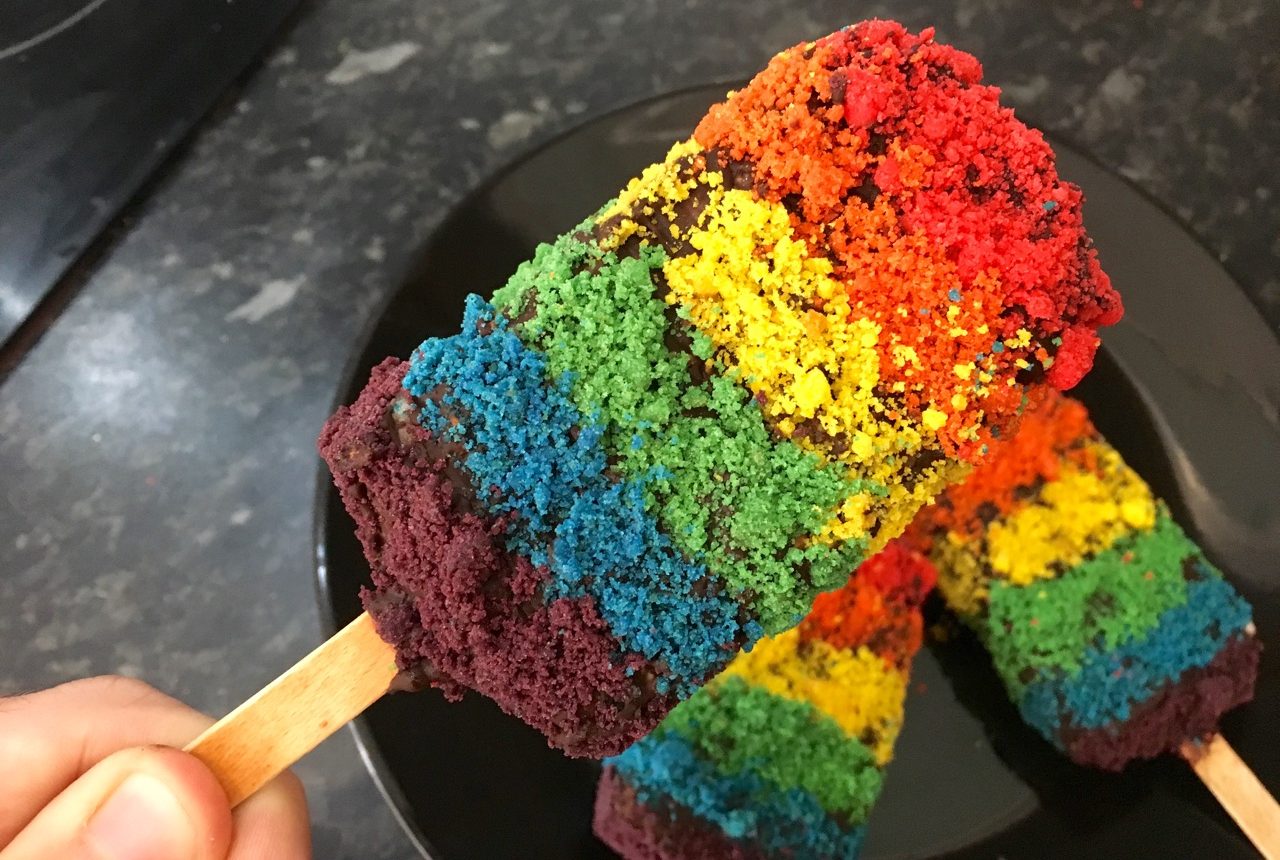 You should have a heap of leftover rainbow crumbs which you could use as a topping for cakes, ice creams, chuck them in any leftover chocolate to make a bark or just eat them with a spoon like I did. 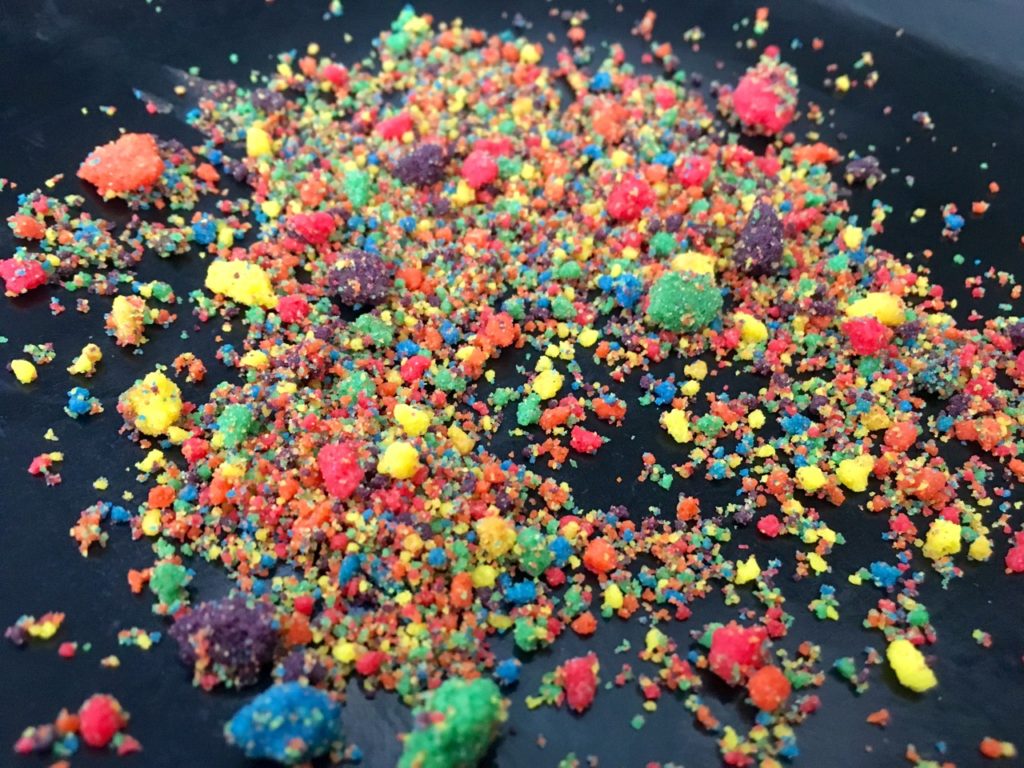